skip to main | skip to sidebar

This past week I had the opportunity to speak at three SQL Server R2 Launch events. I spoke in three cities in four days. On day one I spoke in Omaha, NE, the next day we stopped in Overland Park, KS and finally St. Louis, MO. Each event was held at a Microsoft facility. The largest crowd was in St. Louis, there were approximately 75 people in attendance. I traveled with one of our Salesmen and two Microsoft Employees.

My role in each event was to do all the demonstrations. The topics that I covered were structured completely around Self-Service Business Intelligence. In addition we also did a couple chalk talks on the new data warehousing methodologies and appliances that are available or will be available soon from Microsoft, Fast Track and Parallel Data Warehouse. Overall they were all accepted by the audience with a few questions regarding the true practicality of the features in a large organization. As expected, the Power Pivot demonstration was a big hit. However, I was surprised that several attendees in each city was excited about the Utility Control Point and Date Tier Applications.

I will be doing a SQL Lunch on each of the demonstrations in the upcoming months. The topics will include: Power Pivot, Report Builder 3.0, Utility Control Point, and Data Tier Applications. Stay tuned here and the SQL Lunch for the dates.

Posted by Patrick LeBlanc at 6:23 AM 2 comments:

During my last SQLLunch, Introduction to SSIS, I was asked an interesting question by one of the attendees. He asked, how do you edit a package once it’s saved in the SQL Server package store? My response was to open your SSIS project and edit the package from Business Intelligence Development Studio (BIDS). His response was, I did not save the project. Huh, what? That’s what I thought. He tried to explain further, but I did not quite understand. He said I will be at the user group on Wednesday night, which I spoke at, and elaborate a little.

As promised he arrived on time at the user group meeting ready to explain his problem and expecting a solution. After we chatted for a little I realized the problem. He asked me to open SQL Server Management Studio (SSMS) and connect to my local SQL Server Integration Services (SSIS). Then he said expand the Stored Packages folder then the MSDB folder. 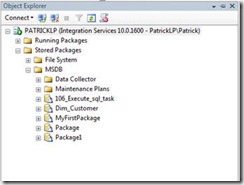 He then said, see there they go, but how do I edit them. Then I understood. When he completed a package it was saved to the SQL Server, and once he was done he closed the project without saving. As a result, the packages resided on the server, but he did not have the project that contained his packages. So he could not edit them.

I explain to edit them, open BIDs and create a new SSIS project. Then right-click on the SSIS packages folder in the Solution Explorer and select Add Existing Package and the following dialog box will appear. 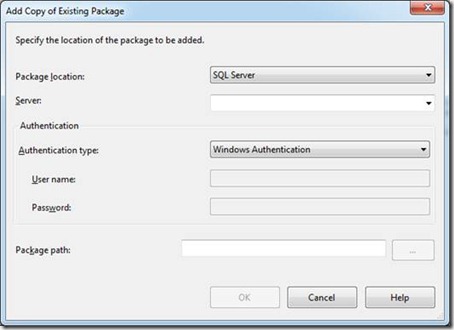 Since his packages were saved on the SQL Server, I told him to accept the default, SQL Server, for the Package location. Then I told him to choose his server name, and finally click the ellipses button next to the textbox labeled Package path and the following dialog will appear: 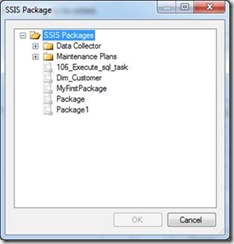 Select the package you want to edit and it will be included in the project. Once complete double-click the new package in the solution explorer and you can begin editing the package.  I explained to him to always save his SSIS projects when complete so he could always open the project for editing to avoid the extra steps.

So for all of you that don’t save your SSIS projects and you want to edit them after they have been deployed, follow these steps.

This week I will have the opportunity to speak at two different events. The first is on Monday, April 12th, at the SQL Lunch. I will be doing an Introduction to SSIS presentation. The presentation is online and will begin at 11:30 AM CST. If you have time during lunch, please join me for a quick presentation on SSIS.

On Wednesday, April 14th, I will be speaking at the Baton Rouge SQL Server User group. I will be do a Backup and Data Compression presentation. If you are in or around Baton Rouge, LA, please stop by for some networking, food, COMPRESSION, and free giveaways.

If you would like to speak at either the SQLLunch or the Baton Rouge SQL Server User group feel free to email me at pleblanc@sqllunch.com. You can follow the SQL Lunch on Twitter (@sqllunch) and the User Group (@BRSSUG).

Posted by Patrick LeBlanc at 4:40 PM No comments: