skip to main | skip to sidebar

A new feature of SQL Server 2008 is Table-valued parameters (TVP).  This feature will allow Developers and DBAs to pass tables as parameters to stored procedures.  You cannot pass a variable table or temp table, you can only pass a Table Type, which is an alias data type or a user-defined type.  So how do you use it?  The first step is to create  a Table Type.  See the following script:

In the variable declaration of in the above stored procedure, the last variable is declared as the Table Type (Sales.CountryCodes) created in the first script.  Then the Table-valued Parameter (TVP) is used in the last JOIN of the query to limit the result to the items or Country Region Codes contained with the TVP.  On thing to be aware of is that the Table Type is read only.  The contents of the table cannot be modified.  Now that all of the formalities are out of the way, how do you use this in T-SQL?  The following example is a script of how to call a stored procedure that has a TVP as a parameter:

As you can see in the above script, you will populate the TVP the same way that any other table is populated.  Once it is populated it can be passed to a stored procedure.

Posted by Patrick LeBlanc at 9:43 AM No comments:

Recently I tried to deploy a report to a Report Server on my laptop, which is running Windows 7 Ultimate. Unfortunately I received the following error:

The permissions granted to user ‘MachineName\SomeUser ‘ are insufficient for performing this operations.

This confused me a bit since my account was an administrator. After digging a bit I found a very simple solution. Right-click on the Visual Studio icon or the Business Intelligence Development Studio icon and click Properties. Then go to the Compatibility tab. On that tab, in the Privilege Level section select the checkbox next to the item labeled Run this program as administrator. See the below screen shot example: 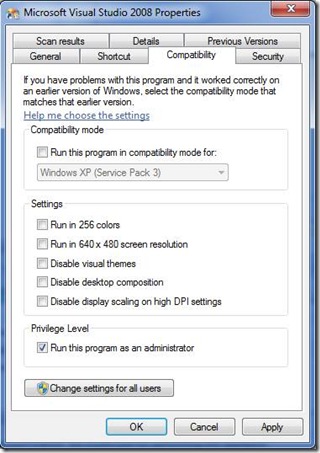 Once done, restart the application and Deploy your report.

Posted by Patrick LeBlanc at 6:01 AM No comments:

At most large companies one business requirement is that all reports have the same look and feel.  This may vary by department, but there is typically some level of standardization amongst the business entities.  In most cases there is a header and footer template that needs to be seen on all reports.  Often developers I have seen developers start from scratch or copy and paste and existing report.  Those days are gone.  For all of you still using Reporting Services 2005, don’t worry this method is available to you also.  Here are the steps:

1.  Create a template report, maybe and .rdl that contains only the header and footer information.  These are items that are typically used throughout a company or department.

2.  Copy the .rdl file to one of the following directories

The next time you create a report, right click on the Reports folder in the Solution Explorer of your Reporting Services Project.  Then choose Add –> New Item.  A dialogue box will open, similar to the one below: 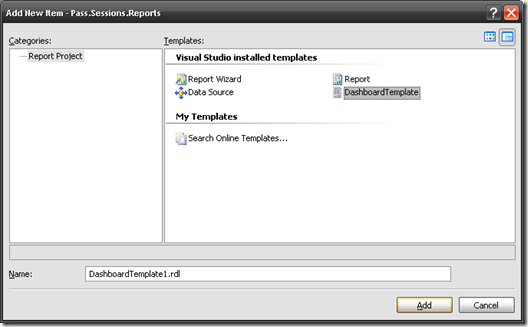 In the above screen shot, my template is named Dashboard Template.  Choose that item and click Add.  When the report is added to you project it will look exactly like the template you created.  Happy Report Writing!

After several tries I think we finally have it working.  If you were unable to attend the last two SQLLunches, go to www.SQLLunch.com and go to the Archived November meetings.  They are both available for your viewing.  If you have any questions or comments about the SQL Lunch, please send an email to webmaster@sqllunch.com.

Posted by Patrick LeBlanc at 8:00 AM No comments:

When partitioning was first introduced in SQL Server 2005, I thought what a great idea.  However, when I started reading Books Online I thought, this is going to be a big Pain in the you know what.  After reading Kimberly’s article, Partitioned Tables and Indexes, I was convinced of how easy it would be to implement Partitioning and how it would help manage and maintain Very Large Databases, specifically warehouses.  The article is a little dated, but if you have any questions about Partitioning from a management and maintainability stand point this article is a must read.  She discusses topics that include, planning, defining, steps to create, etc…  This article should definitely help jump start your design and implementation of partitioning in your SQL Server environment.

To read the article in its entirety click here.

Posted by Patrick LeBlanc at 8:25 AM No comments:

Presenter: Patrick LeBlanc, currently the Sr. Database Administrator for Lamar Advertising. I have worked as a SQL Server DBA for the past 9 years. My experience includes working in the Educational, Advertising, Mortgage, Medical and Financial Industries. I am the founder of TSQLScripts.com, SQLLunch.com and the President of the Baton Area SQL Server User Group.

Patrick LeBlanc, currently the Sr. Database Administrator for Lamar Advertising. I have worked as a SQL Server DBA for the past 9 years. My experience includes working in the Educational, Advertising, Mortgage, Medical and Financial Industries. I am the founder of TSQLScripts.com, SQLLunch.com and the President of the Baton Area SQL Server User Group.

If you would like to receive email notification about upcoming SQL Lunches go here:

Posted by Patrick LeBlanc at 6:52 AM No comments:

How did I become a DBA

This past Tuesday night I had the honor of speaking to a small group of college students who are all members of the Association of Information Technology Professionals (AITP). This was my third opportunity speaking to a group of college students and my second time speaking to an AITP group. The structure and order of the meetings are very similar. I start with a short introduction and continue by discussing some trends in Information Technology and my current career. This meeting began in a very similar fashion; however this time I was asked a question that I had never been asked. One student asked me, “How did you become a DBA?” It’s strange that the question had never been posed before. Nevertheless, I was up to the challenge.

In the mid 1990’s I began my career in corporate America as a mortgage underwriter. This was a very monotonous job. A few variations to the type of income documentation, credit level or appraisal, but overall the same set of information. One primary part of the job was traveling to various branch offices within the United States. During the travels an underwriter was expected to teach the Loan Originators employed at the branch how to build a loan package that contained only the information that was needed for the approval of the loan.

When the underwriter returned to his or her home office, the person was required to send emails to the each branch, listing each loan underwritten in the branch and a list of pended items for each loan. Typically an underwriter could spend a day or two composing the emails for each branch. At the time I was not a very good typist. So for me, this was a very daunting task. During my undergraduate studies I had taken an Introductory Information Technology course. One of the requirements was to develop an Access Database. I remembered how Access stored information that was later used for reporting and making decisions. At that moment I decided that I was going to design an Access database that would store this information and I would later use that information to somehow compose these emails.

The idea was great but there was one problem, I did not own a portable computer, or as we know them today as a LAPTOP. Fortunately my mother-in-law was always purchasing things she did not need, and fortunately during our last visit she had given me a TOSHIBA Satellite PRO (T2400CT). Don’t believe me check this out: 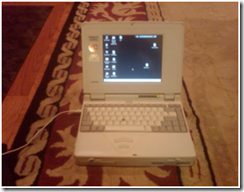 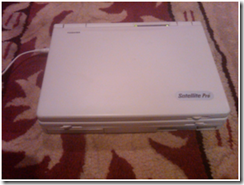 I could not believe that it still worked.  Running Windows 95 nonetheless.

Coupling my little laptop with an Access Bible, I developed a nice Access Database, forms and reports included, that I used to collect data when I was traveling.  I assigned the Macro to a button, and when the button was clicked an Email message was opened with a Word document attached that only contained data for a specified branch. The only thing left was to add a recipient and click the Send button. This reduced the time I spent composing these emails from 2 or 3 days to a couple of hours. In the end the CEO found out about my little database and decided that it should be used by all Underwriters. I explained to him that my book stated that Access should not be used by no more than 5 or 10 people concurrently. He suggested that we upsize it to SQL Server 7.0 for the backend and keep the front end in Access, which led to the beginning of my obsession with databases.  From that project I started developing larger databases and moved on to become a DBA for a small Mortgage Company in Baton Rouge, and the rest is HISTORY!!

Posted by Patrick LeBlanc at 6:56 AM No comments:

If you are in the Baton Rouge Area stop by and join our user group meeting this evening.  The details are below:

Barry is currently Vice President for Technical Solutions with Birmingham-based ComFrame Software. Since joining ComFrame in 2001, his client successes include Aflac, Honda, and the Children's Hospital of Alabama. In addition to speaking at the Alabama .Net Code Camps 1, 4 and 5, Barry has delivered presentations on Business Intelligence with Microsoft technologies at SQL Saturday 1 and 4.

Talk to you soon.

Posted by Patrick LeBlanc at 8:23 AM No comments:

Data Compression was introduced in SQL Server 2008.  This feature helps compress data inside the database, thus potentially reducing the size of the database.  In the article titled, Data Compression:  Strategy, Capacity, Planning and Best Practices, the author outlines several pertinent details regarding the implementation of this new feature.  Some topics discussed included:  What to Compress, Estimating Space Savings, Resource Requirements and the Side Effects of Compressing a Table or Index.  The article also includes a couple of scripts that will help you determine what level of compression should be used.

To read the article in its entirety click here.

Posted by Patrick LeBlanc at 10:19 AM No comments:

Well if you attended PASS, you already know that I am changing jobs.  I recently accepted a position with Pragmatic Works.  I am honored to have the opportunity to work with Brian Knight and his staff over at Pragmatic Works.  For me this is somewhat of a career change.  Most of my career I primarily focused on the OLTP side of things.  In my new position I will be moving into the OLAP realm.  This is an exciting change for me and I look forward to the many challenges.

Posted by Patrick LeBlanc at 8:24 AM No comments:

Presenter: Kevin Kline: Kevin is the Technical Strategy Manager for SQL Server Solutions at Quest Software. A Microsoft SQL Server MVP, Kevin is a founding board member of PASS and the author of several books including “SQL in a Nutshell” (O’Reilly & Associates). Kevin is a top-rated speaker at industry trade shows and has been active in the IT industry since 1986.

If you would like to receive email notification about upcoming SQL Lunches go here:

Posted by Patrick LeBlanc at 6:51 AM No comments: